HCM CITY – With the COVID-19 pandemic leaving many people in HCM City poor and hungry, a small group of friends in District 10 have cooked up a wonderful initiative: making food and distributing it to people they see on the street.

Nguyễn Quốc Bảo has been doing this for three months, making vegetarian meals and riding around the city to give them to lottery ticket sellers, poor homeless people and others he feels might be struggling to earn a living.

Himself a vegetarian, he typically cooks rice, tofu and vegetables, which also keep costs low. Every day he wakes up at 6am and does this charity work until 5pm before preparing for the next day’s meals until 9pm.

At first he did everything by himself, making and delivering around 50 portions of food daily. Then an expat friend called Percy Smith joined him.

Briton Smith teaches English to kindergarten kids, and has been in Việt Nam for nearly two years. He used to rent motorbikes from Bảo’s shop on Bùi Viện Street that has been closed for more than a year now due to a lack of foreign tourists.

Besides himself helping with cooking and delivering the food, he has also got some of his expat friends to join. The group now makes hundreds of portions every day, with the number once reaching 1,200. 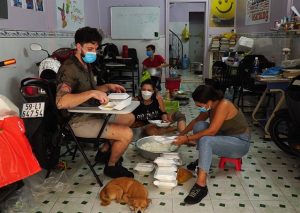 Some of Bảo’s expat friends help pack the meals. At first he worked alone before they started to join to help. – VNA Photo

Smith comes to help on Mondays and Fridays with his expat girlfriend.

He rides a motorbike along with Bảo, each carrying a huge tray loaded with styrofoam boxes of food at the back, and they travel around the city to hand them to people on the street who look like they could do with a meal.

Smith solicited donations on a HCM City expat group on Facebook, and the results have been wonderful both in terms of the contributions they get and the attention.

“Some people have seen [us] on Facebook and they come and help,” he says even as he works dexterously packing box after box of food.

The group makes hundreds of meals every day. Many people make donations to the group, allowing it to feed more and more unfortunate people. – VNA Photo

Aisha Amelia, another English teacher from the UK, is one of the more recent members of the group and also a friend of Bảo.

“[Bảo] spends a lot of his own money, all his time every day to give, give and give to everybody,” she says.

“I feel very happy. Sometimes it’s a bit sad to see people so hungry during the pandemic. But I feel very lucky to be helping Bảo and helping people in Việt Nam.”

A lot of people, especially expats, wanted to join Bảo’s group, but due to the pandemic they have had to limit the number of members. Nevertheless, a great deal of financial support is coming from generous individuals, allowing the group to feed more and more people.

“The expat members are very passionate with this charity work; they really put their hearts into it,” Bảo says, his face evidently brimming with joy despite being obscured by his mask. 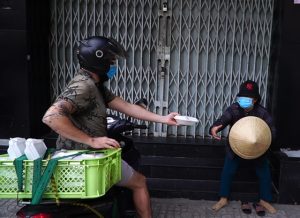 While the expat members are helping Bảo out of generosity, Bảo’s helpfulness and kindness towards them in the past are definitely big motivating factors for them.

Smith says Bảo has helped Aisha and him with many things, doing whatever he possibly can, so this is a chance to help him in return.

“I won’t be able to do this as much [after the pandemic] because I would be teaching again. But I will always help Bảo and the Vietnamese community.”